Auckland’s largest mixed-use precinct, Commercial Bay, will be a magnet for foodies when it opens in March 2020. With a mix of both international and homegrown vendors, the new Commercial Bay bars, restaurants and cafes are sure to surprise and delight.

Showcasing diverse vendors that have just been announced - with a rich array of cuisines and world-flavours including Thai, Middle Eastern, Korean, Indian, Mexican, South American, Greek, and Vietnamese all under one roof, The Harbour Eats food offering will hold more than 650 seats.

With the all-day dining spot being a go-to destination for breakfast through to dinner and drinks, it is certainly set to cement Auckland’s reputation as a outstanding food destination.

The final announcements of world-class eateries and bars opening at Commercial Bay includes:

Below is the full list of eateries. Get your tastebuds ready!

Alongside Harbour Eats, Commercial Bay will have additional food and beverage offerings located throughout the retail precinct including sit-down restaurants and kiosk style quick eats for shoppers on the go. Joining and making Commercial Bay home are brand-new names to the Auckland food scene Lieutenant Coffee Bar and Eatery, featuring small-batch coffee and a considered menu, and seaside tavern Reign and Pour, the second offering from Bedford & Soda’s Matt Nicholls.

Precint Properties' CEO, Scott Pritchard says visiting Harbour Eats will be an experience unlike anything seen before in the city.

“With views of the Waitematā, concept developed by New York based AvroKO, impeccable design by Paul Izzard, and an incredible range of food and beverage outlets, Harbour Eats is sure to shake up the Auckland hospitality scene. The ever-evolving space will surprise and delight guests, establishing itself as a true hub for locals and visitors and something that will be one of a kind in Auckland.”

“This is the spot that you’ll come for dinner and drinks with friends after work, to celebrate a special occasion, for a business meeting, to while away the hours over a long lunch, or to grab a bite to eat before heading to a show or jumping on the ferry to Waiheke - the diversity of the space and eateries will truly lend itself to any social occasion,” concludes Scott Pritchard.

Most of the tenancies and furniture for Harbour Eats construction is taking place in a 2,050sqm warehouse off-site, which is approximately the same size as Harbour Eats (2400sqm), just slightly wider and shorter. Sustainable natural materials will be used to create the furniture. Tenants can also complete their building fit-out at the warehouse, and once complete, all units will be deconstructed and freighted to Commercial bay for permanent installation via crane. Benefits of constructing the dining precinct offsite include better overall quality of the final product, less waste and rubbish created, reduced number of contractors as well as retailers getting the chance to better know their new space prior to opening. Precinct Properties believes prefabricated modular construction of this scale has never been done before. 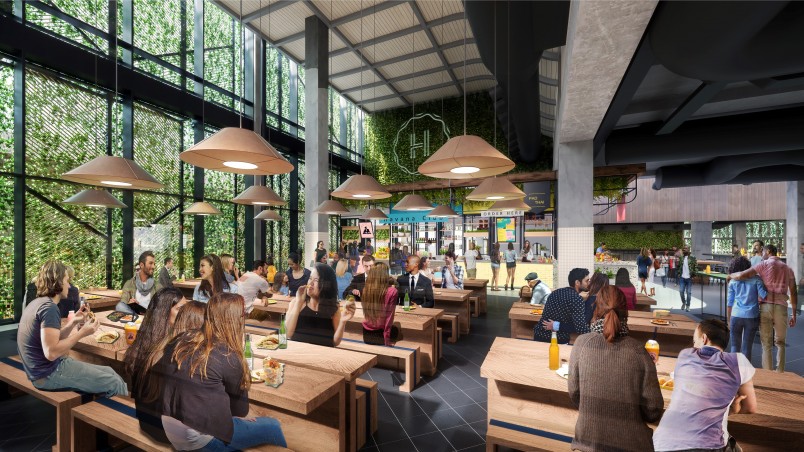 “Harbour Eats will be a dining experience unlike anything consumers have seen. With views of the Waitematā, impeccable design and an incredible range of food and beverage outlets, Harbour Eats is sure to shake up the Auckland hospitality scene,” he says.

With up to 650 seats, Harbour Eats is inspired by food halls and markets in cities like New York, London and Paris. The hall-style dining spot, located on level two of Commercial Bay, will be open all day, with food available from breakfast to dinner, as well as a bar serving cocktails, beer and wine.
On top of its incredible dining offering, Commercial Bay is set to include an aspirational mix of international and local fashion labels.

Commercial Bay retail will open in March 2020 and located on lower Queen Street.

Our foodie tour of Albert Street