Ihi by Lisa Reihana at The Aotea Centre

Ihi by Lisa Reihana at the Aotea Centre

Ihi, a large-scale digital work by renowned New Zealand artist Lisa Reihana, telling the traditional Māori story of the origins of our world was officially unveiled by Prime Minister Jacinda Ardern in January 2019 and is on permanent display in the Aotea Centre foyer.

Commissioned by Regional Facilities Auckland (RFA), Ihi fills two floor-to-ceiling spaces in the Aotea Centre foyer, enthralling viewers with the story of Ranginui and Papatūānuku playing out on 65 square metre digital screens. It is now one of the largest and most significant works of contemporary Māori art in Aotearoa New Zealand.

“Like other world-class cities, such as Melbourne with its Federation Square, and London with the Southbank, Auckland needs public spaces that proudly showcase our identity and our stories.

“Ihi is not only a fitting centrepiece for our Aotea Arts Quarter, it is also an important addition to our rich Māori arts and cultural landscape."

Ihi is the latest addition as part of Aotea Centre's recent comprehensive internal refurbishment, celebrating Te Ao Maori - our unique Maori world and heritage. Says RFA's Board Chair Andrew Barnes, “we recently renamed Aotea Centre’s Kiri Te Kanawa Theatre to recognise a great ambassador for the arts and for New Zealand. Now we have Ihi, by one of our country’s most celebrated Māori artists.” 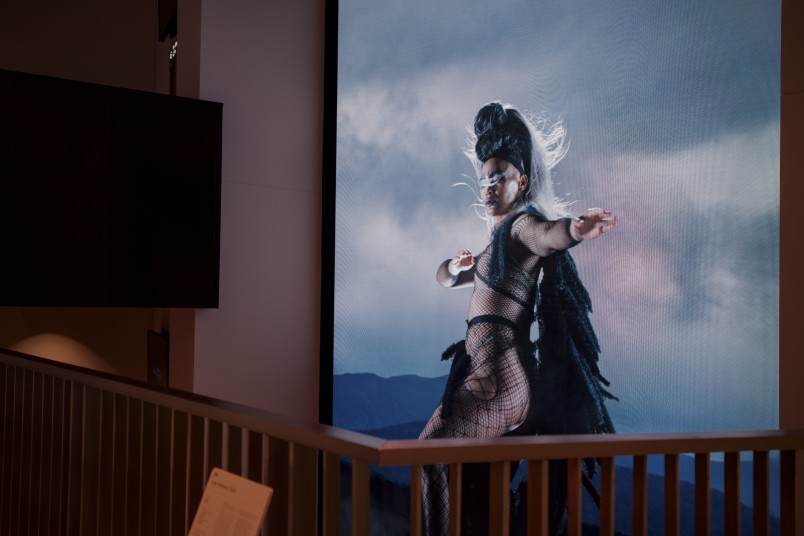 Ihi explores the relationship between Tāne and Papatūānuku, and the separation that brought the world of Te Ao Mārama to existence.

In the beginning, Ranginui (sky father) and Papatūānuku (earth mother) were locked in a tight embrace. Their sons and daughters dwelt in the darkness between them. Frustrated by the claustrophobic space in which he was confined, Tāne decides to use his powerful legs to prise Ranginui from Papatūānuku, letting light between his parents and life to flourish. After wrenching his parents apart, Tāne surveys the view he has created - a cosmos of stars and moody brooding skies.

Tane continues his quest and climbs to retrieve the baskets of knowledge. Below is Papatūānuku, resplendent in her role as Earth Mother.

Ihi is the division, the separation, the power. Here, light and energy converge under tension and we can feel the push and pull of life’s force.