Auckland’s Cycleways are becoming more accessible to the public in 2022 and its never been easier to go cycling in Auckland. With an abundance of new bike parking locations popping up in newly transformed city spaces like Quay Street and busy entertainment areas like Aotea Square, as well as fantastic new cycle paths opening up. Auckland city is improving accessibility and moving us closer to a full network of safe cycle routes. There's never been a better time to try two-wheeled transport as a means of getting in, out and around the city centre. Let us get you well versed with all the need-to-know details in our guide to the new Auckland cycleways, cycle paths and new bike routes in the city 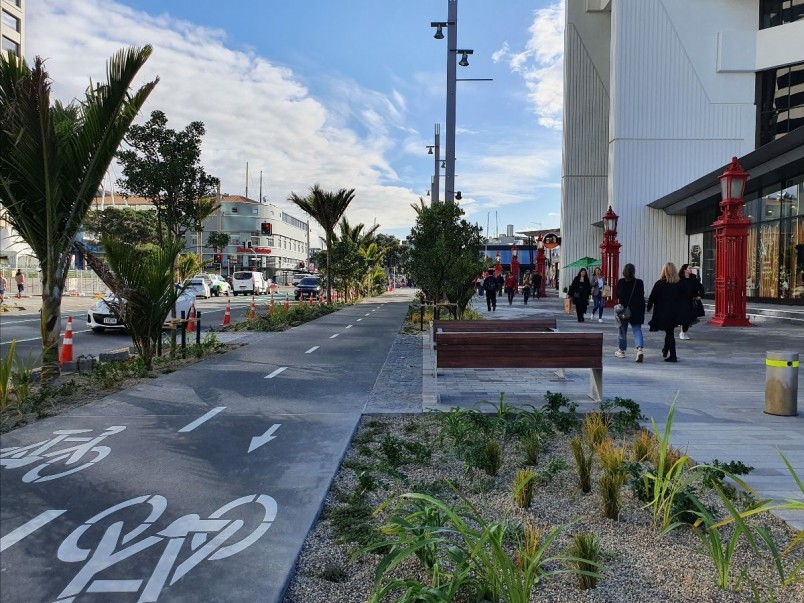 Quay Street and the Viaduct
There are a growing number of cycleways now connecting Aucklanders to the city centre, making commuting for work or study easier and more enjoyable. A brand new dedicated cycleway on Quay Street has just recently been finished, with trees planted on one side and the Waitemata Harbour on the other, making it a lovely place to ride.

Also new in the area is Project WAVE, a trial to improve access for those on bikes by connecting the Nelson Street Cycleway through the Viaduct to the Quay Street Cycleway, with bike lanes running along Market Place, Customs Street West, and Lower Hobson Street. If you use the trial lanes, be sure to give your feedback to Auckland Transport if there’s anything you think is great or could be better – feedback is an important part of evaluating the trail, which is underway until August.

Te Ara i Whiti | Lightpath
You've probably seen Te Ara i Whiti or Lightpath before - it's the eye-catching pink path that was created using a redundant motorway offramp. It's a popular hybrid space - both a cycle and walking path that encourages exploration, discovery - and not to mention a fantastic photo opportunity for your Instagram feed! It’s functional too – it’s a fun and safe connection from the north-western cycleway into the city centre.

It's important that if you're cycling into the city centre, there's somewhere to park your bike! Some more bike parking bays have popped up, including outside Aotea Square on Queen Street making it easier to store your bike when you're planning on catching a show at an arts venue nearby.

Free, secure Locky Docks are also available in two city centre locations currently - Silo Park (on the corner of Jellicoe and Beaumont, by the playground) and at Les Mills Victoria Street West – with more on the way soon! To use Locky Docks, simply tap your AT HOP card or download the Locky Dock app. If you're an e-bike rider, these have the added bonus of being FREE charging stations.

It’s a good idea to check out the convenient AT interactive map which is a great way to access all information about bike parking and bike lanes. 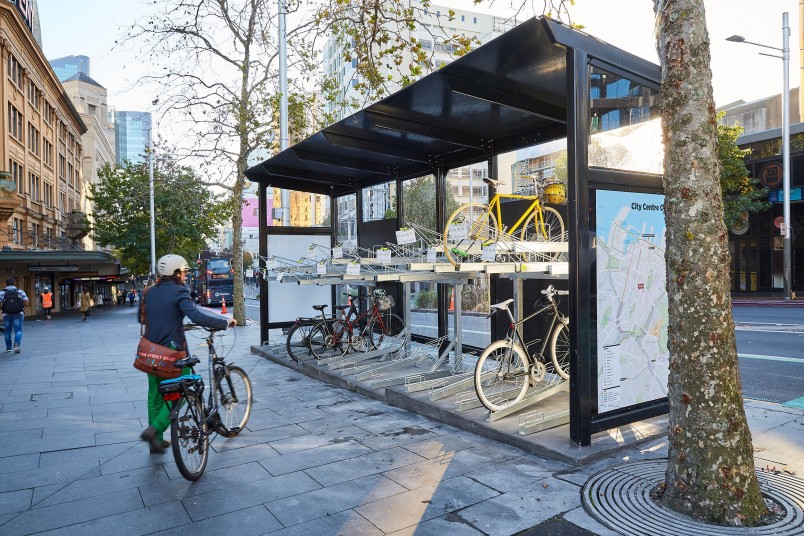 Longer term parking
Now open inside the Britomart Carpark, you can rent a secure, undercover spot to park your e-bike or push-bike by the month. With 80 spaces available, simply email parking@britomartgroup.org for more information and to secure your spot.

If you’ve racked up the kilometres exploring or speeding between meetings all day, you can recharge your ride for free at Locky Docks at Silo Park (on the corner of Jellicoe and Beaumont, by the playground) and Les Mills Victoria Street West (with more coming soon). 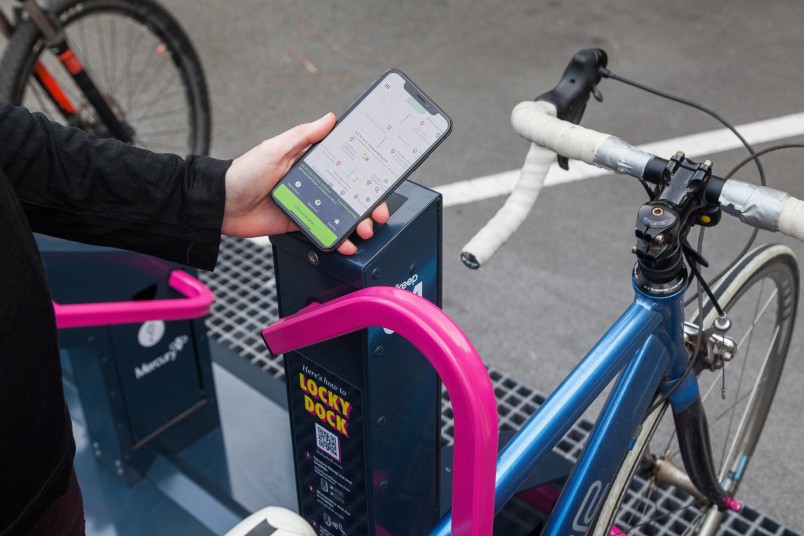 Travelling a bit further, but want to cycle around the city centre when you get here? Bikes and scooters can be taken on most trains and ferries with no extra fee, with any fare-paying passenger subject to available space (peak train times not recommended). Buses also allow bikes and scooters if they fold up. 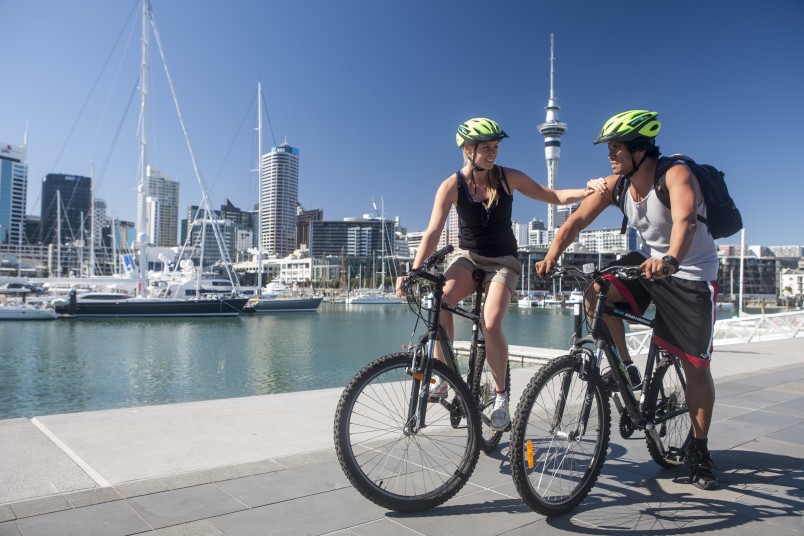 Keen to hire a bike to explore the city centre? Adventure Capital bike hire can make this happen for you with their high-quality bikes. Hire for the day, grab a coffee at the waterfront, ride up to the art gallery to look at some stunning art, then head back down to Britomart for a delicious lunch all while getting in some great exercise. Power to the Pedal also offer a unique cycling experience - their tours will show you the highlights of Auckland, all from a local's perspective. 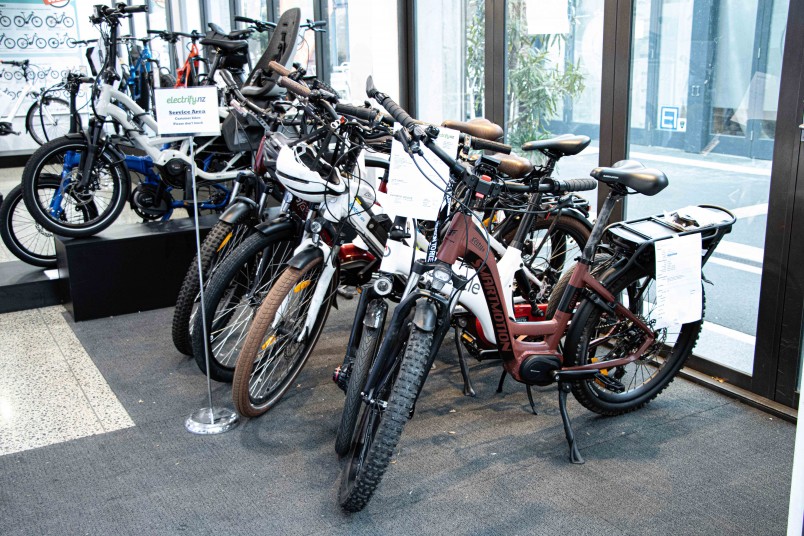 Shopping for bikes in the city centre

Evo Cycles  in Britomart provides Aucklanders with the largest range of bikes in the country. They also offer comprehensive services and knowledgeable advice about all things cycling. The business is family-owned and operated, so you can put your full trust in the team.

Or if you're thinking of going electric, check out Electrify NZ have grown to become one of New Zealand's top electric bike specialists. Pop in to the Victoria Park store whether you are after a commuter, electric bike, a comfortable bike for the paths and trails, or a serious off-road mountain bike - free test rides are also available. Also in the Victoria Park precinct is Freed, who sell electric scooters as well as electric bikes and skateboards.

Parking and TransportActivities
Add to favourites