September 13 – 19 is Te Wiki o te Reo Māori | Māori Language Week, and to celebrate, we’ve pulled out a few of the city centre locations and art pieces with Māori names and cultural significance. 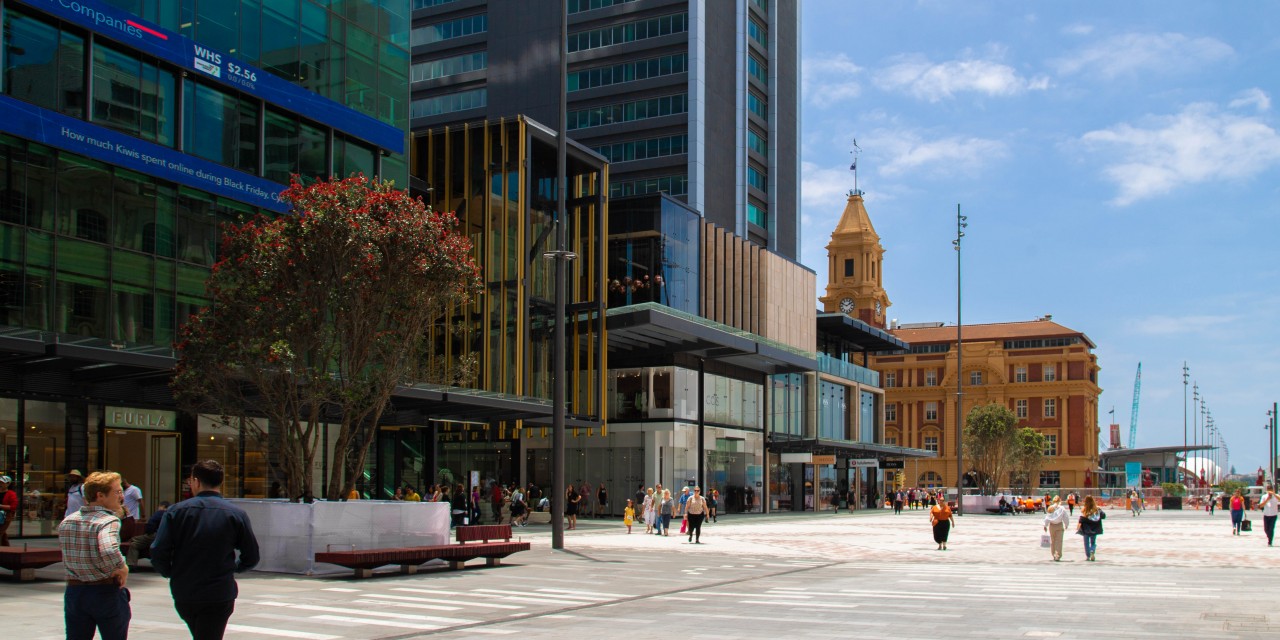 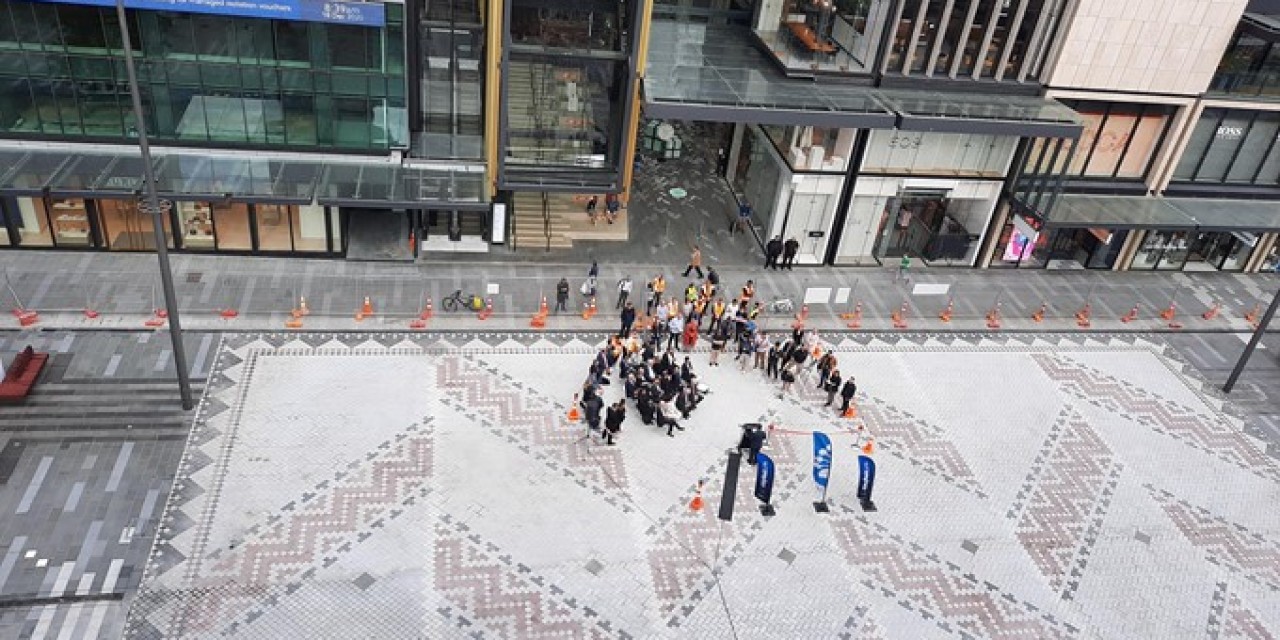 Be welcomed by Lower Queen Street’s public square – Te Komititanga. Meaning ‘to mix’ or ‘to merge’ in Māori, the square’s name pays tribute to its location where the waters of the Waitemata and Wai Horotiu (the stream that runs beneath Queen Street to the harbour) merged. The pavers on the square (of which there are more than 137,000 individual pieces) feature three significant patterns. On the southern end (closest to Customs Street) the pattern reflects the meandering of the Wai Horotiu Stream. At the northern end of Te Komititanga, a pattern is used to represent the waves of the Waitemata Harbour coming to shore. In the centre of the square, at the entrance of the former Chief Post Office, a whariki (welcome mat) can be seen. Designed by Mana Whenua Weavers and depicting a traditional woven harakeke (flax) mat, “the whariki facilitates a meeting point; of two waters, of past and present, of people”. 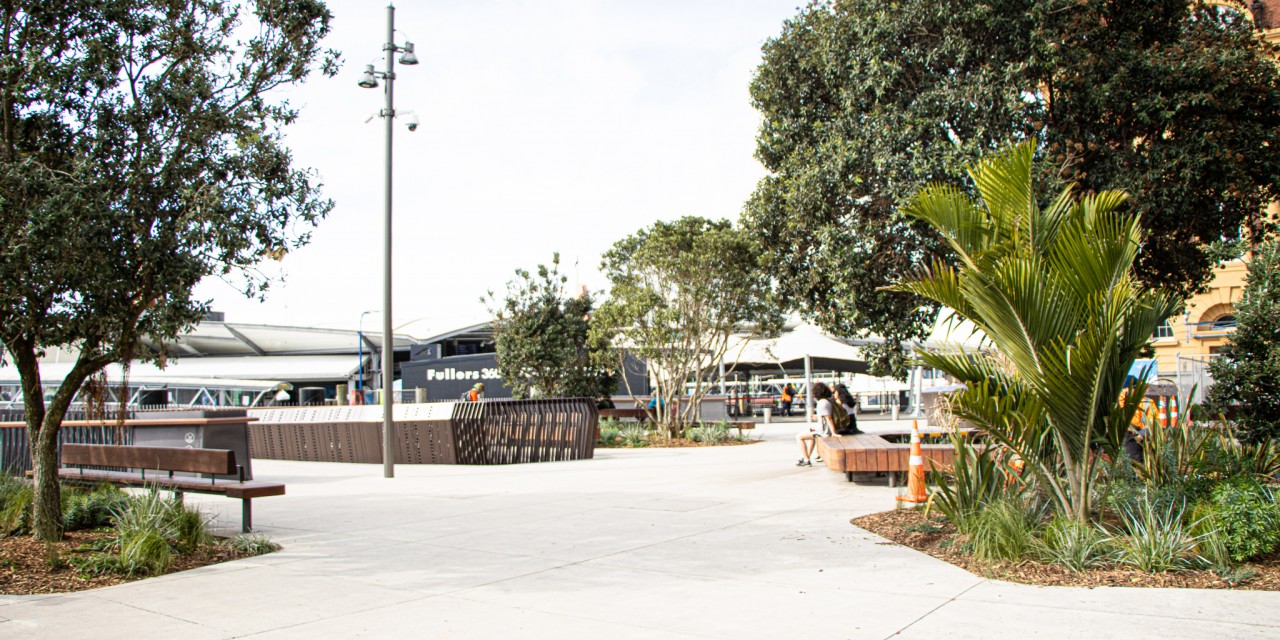 Te Wananga - a public space extending out over the harbour at the downtown ferry basin filled with native gardens and mature pōhutukawa.

At Te Wananga, Korimurimu (woven green safety webbing) is now secured across an opening in the deck suspended above the water for a unique spot to sit. 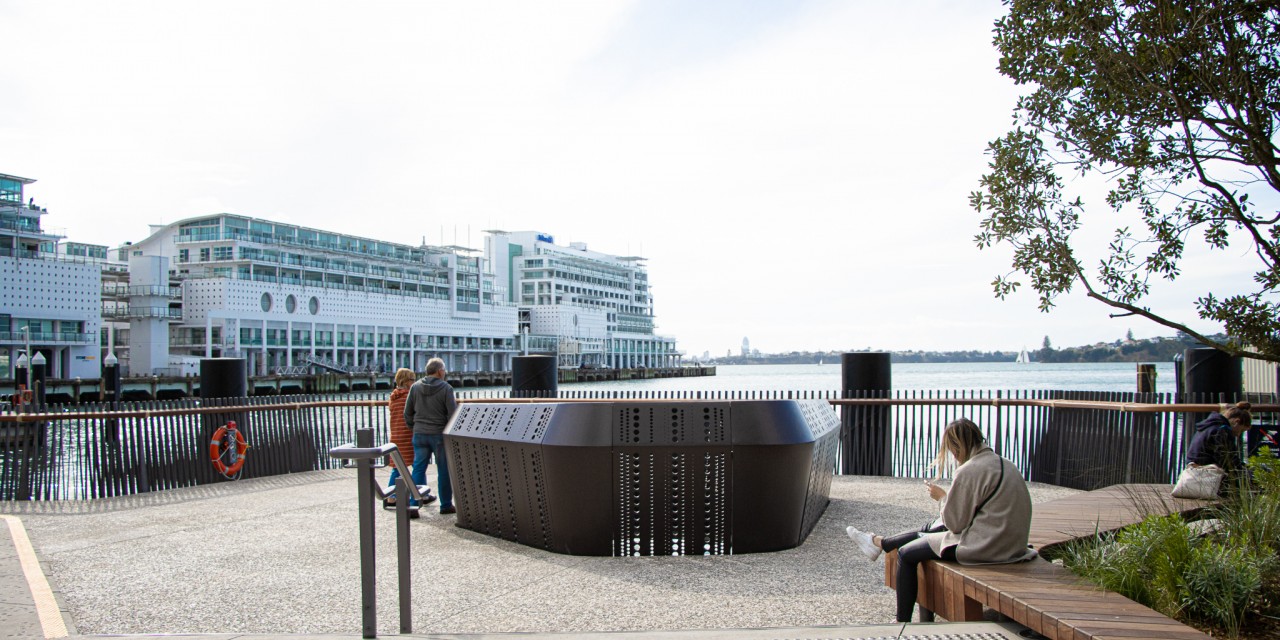 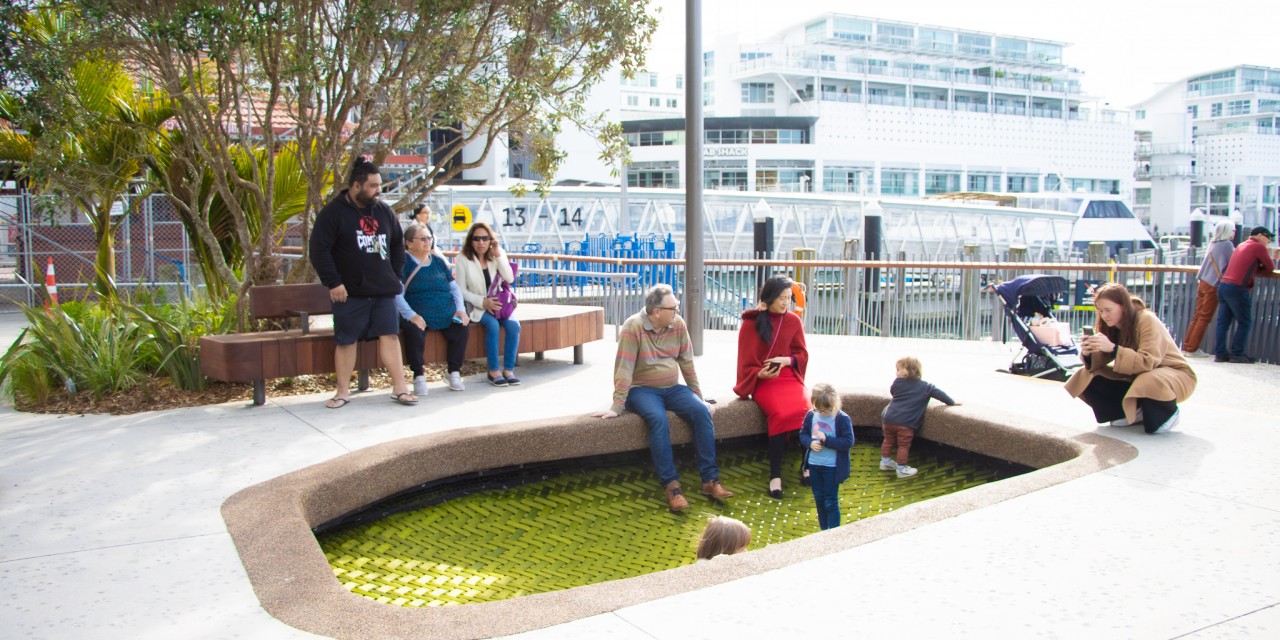 Te Wānanga is the city centre’s newest downtown public space, a beautiful spot for all to enjoy located on Quay Street, close to transport hubs like the downtown ferry terminal, and connecting the land to the sea. This new space encompasses richly meaningful design elements brought to the space by talented mana whenua kaimahitoi (artists).

The name Te Wānanga was gifted by mana whenua, it conveys aspirations for a place for residents and visitors of all ages to come together, enjoy, share and learn. Mana whenua describe Te Wānanga as “a place of learning, bringing together elements like Para Koe (resource optimisation), raranga (weaving) and whakairo (carving). It is also a learning place for sea ecology”.

The new space is shaped like an elevated coastal shelf, with tidal pool apertures letting light into the depths below – the steel balustrades around these ‘pools’ are styled like giant kina shells which are an important traditional food for Māori. Mature Pōhutukawa and native gardens filled with rongoa (medicine) species and harakeke (flax) float above Te Waitematā, providing shade and space to relax while also beckoning birds, insects and gecko.

Two other unique features can be found at Te Wānanga. Kōrimurimu is the woven green webbing that is secured across an opening in the deck suspended above the water, where you can sit with the movement of the tide and the salty sea air coming up from below. The name given to the piece is Kōrimurimu, meaning to be covered in seaweed. Rimurimu is a seaweed which is native to Te Waitematā. This innovative work is by artist Tessa Harris (Ngai Tai ki Tāmaki) in a co-design with Isthmus, taking traditional Māori weaving and reinventing it using hi-tech materials in a super-sized scale for a public place. Peering down into the tidal pool apertures, you can see a series of seeded kutai (mussel) lines. These are here to monitor aquatic health, help filter the seawater in the ferry basin and are a living example of the importance placed on caring for the mauri (essence) and mana (standing / respect) of Te Waitematā. 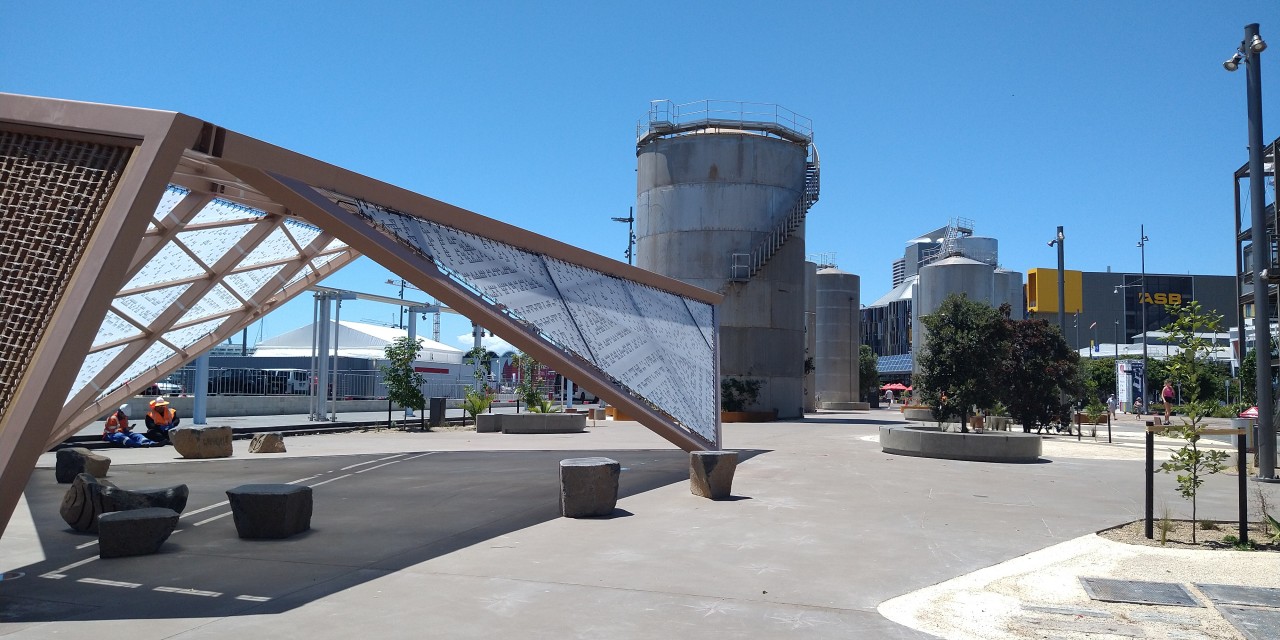 This new structure in Silo Park, designed by Tessa Harris (Ngāi Tai ki Tāmaki), is called Te Nukuao - ‘shelter’. It reflects the sails of waka hourua - large double-hulled ocean-going canoes - referring to the history of Wynyard Quarter as a 'water space' pre-reclamation and serving as a cultural marker for mana whenua. 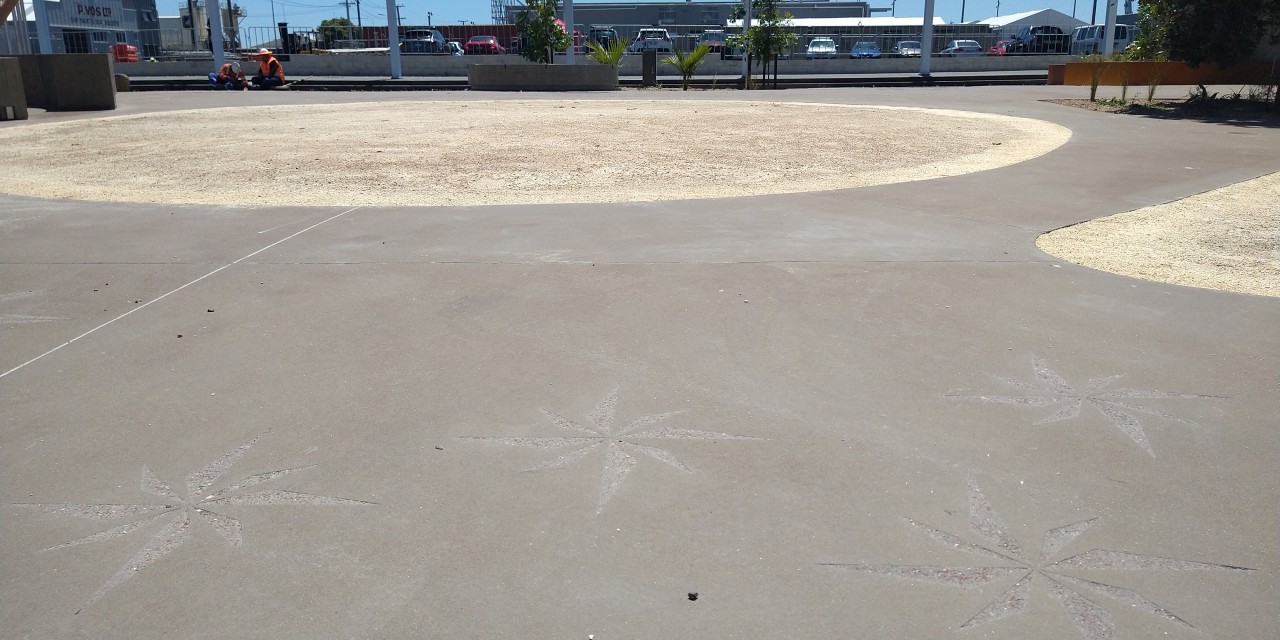 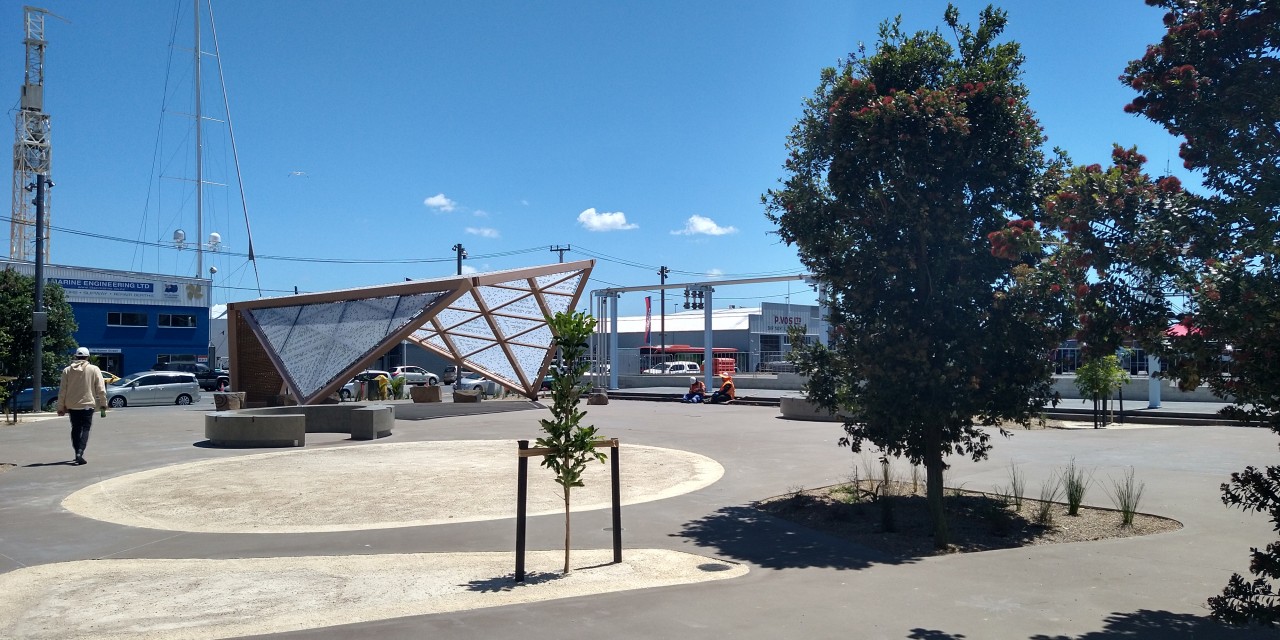 Found in Silo Park, this structure designed by Tessa Harris (Ngāi Tai ki Tāmaki), is called Te Nukuao - ‘shelter’. It reflects the sails of waka hourua - large double-hulled ocean-going canoes - referring to the history of Wynyard Quarter as a 'water space' pre-reclamation and serving as a cultural marker for mana whenua.

If you look closely at the ground you’ll also notice a constellation of stars sandblasted into the concrete too – this design by Reuben Kirkwood of Ngāi Tai ki Tāmaki, ‘Te Waka o Te Rangi’, references an ancient star map which resembles a great waka in the sky.

Located off Lorne Street, in the lower section of Khartoum Place, is Te Ha o Hine Place. In 2016, Te Ha o Hine Place was the name given to this area to acknowledge the location of the Women’s Suffrage Centenary Memorial. This name was gifted by Ngāti Whātua Ōrākei, the name translates to ‘pay heed to the dignity of women’, derived from the whakatauki (proverb) ‘Me aro koe ki te Ha o Hine-ahu-one’. The name Te Ha o Hine Place recognises the struggle New Zealand Suffragists faced until 1893. 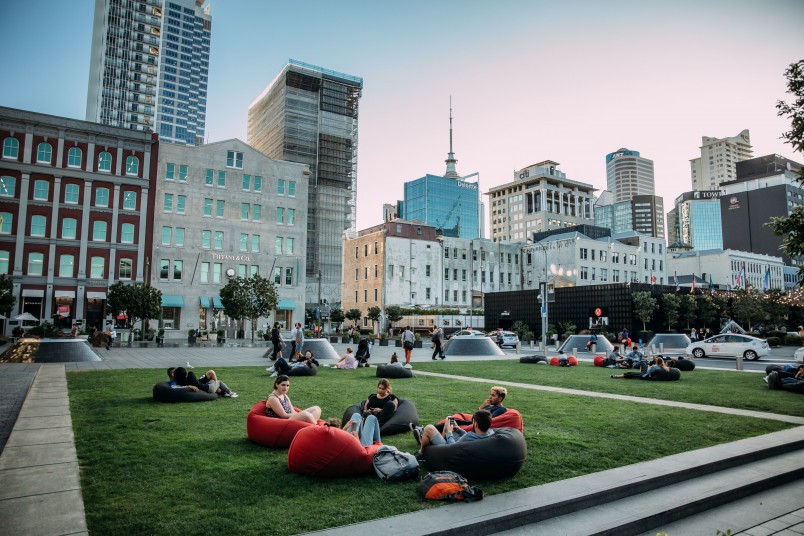 Located in Britomart, this square has been the focus of many public and private events including music gigs, open air cinema screenings, family activities and functions. ‘Takutai’ means ‘foreshore’, reflecting the area’s origins as reclaimed land. Auckland’s foreshore used to run along Britomart Place (originally called Breakwater Road) and Fort Street (originally called Foreshore Street). Takutai Square also features an installation called ‘Pipis and pop jets’. This mahi toi (artwork) by Chaz Doherty was one of the first to be installed in Britomart. It consists of 16 sculptural stones, steel pipi shells embeded in the paving and 24 'pop jets' or fountains. The artwork talks to the early sources of food for Māori in the area, primarily based around seafood. It is a playful art piece and while the jets are active it puts on a stunning display as the water reflects the sunlight by day and night lights in the evening. 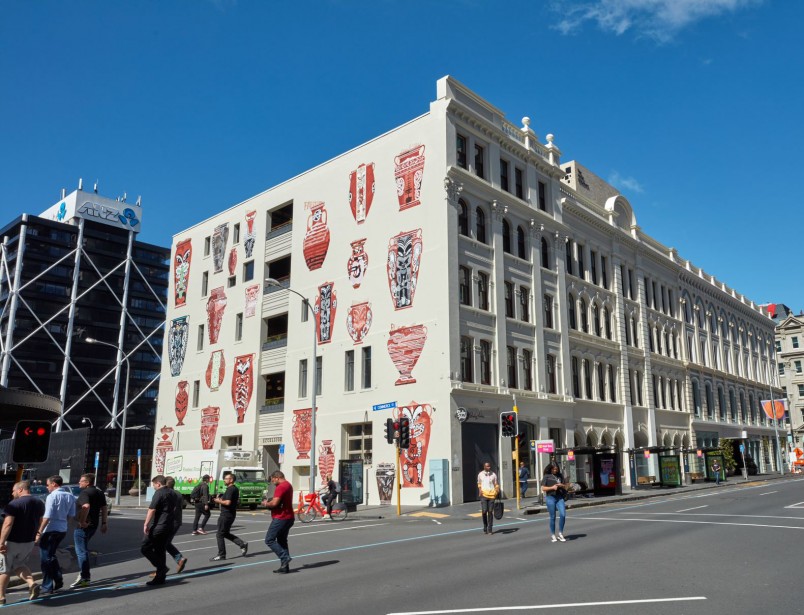 Shane Cotton's 'Maunga' installed in Gore Street, Britomart. Maunga is a permanent new work depicting 25 pots, each referring to a place or mountain in Aotearoa. Image: Russ Flatt for Britomart.

Maunga is a permanent piece of work that covers the western wall of Excelsior House, on the corner of Customs Street East and Commerce Street. Created by Shane Cotton (Ngāti Rangi, Ngāti Hine, Te Uri Taniwha), the five-storey-high work features 25 pots which each hold reference to a place or maunga (mountain) in New Zealand. The idea of the pot comes from a motif theme by Cotton, representing New Zealand and how people bring their own landscapes and sceneries with them when they enter Auckland. The pots act like vessels and highlights the notion that they can carry things, ideas, beliefs and deliver narratives. The 25 pots represent places that Shane has visited, or places that he hasn’t physically been to but he has imagined. 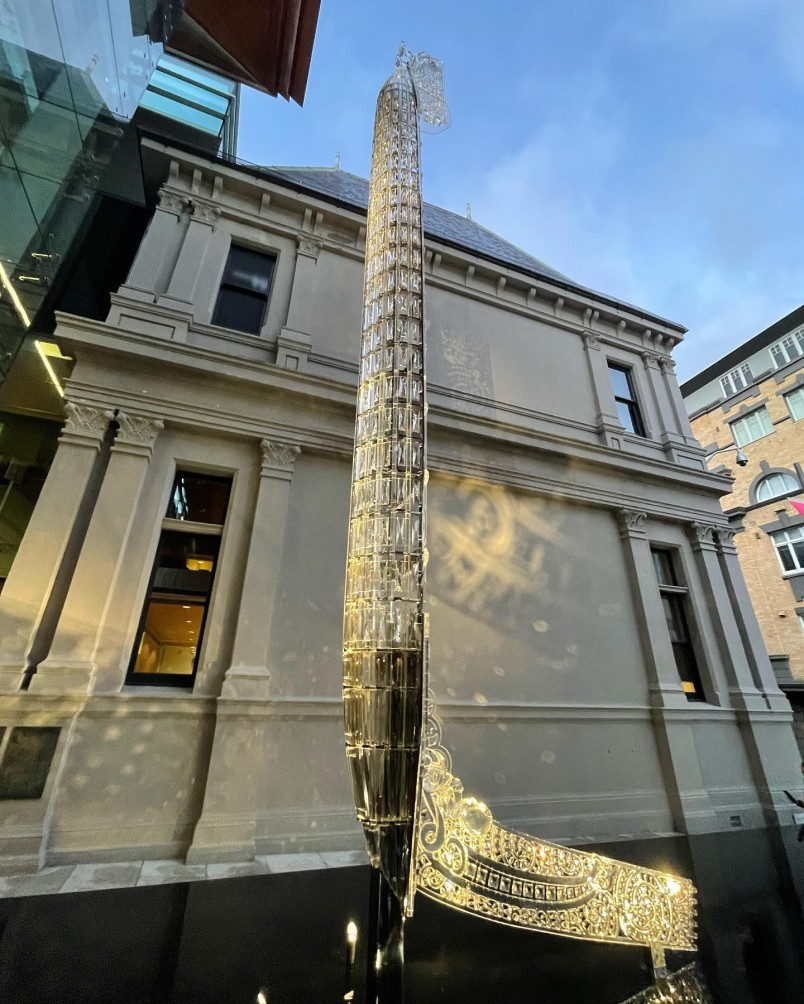 Commissioned by Auckland Art Gallery Toi o Tāmaki and Edmiston Trust, the sculpture, made of 595 iridescent crystals, navigates a spectacular journey from Papatūānuku into the embrace of Ranginui to cast a galaxy of stars over the pool.

The inspiration for the crystalline sculpture originated in the well-known legend of a phantom waka that appeared at Lake Tarawera ten days before the eruption of Mt Tarawera in 1886.

Hovering above the Gallery’s forecourt pool like a compass needle in vertical orientation, the magnificent waka suggests navigation to worlds beyond our own. It also refers to navigators’ use of stars to traverse the vast Pacific Ocean to Aotearoa.

Combining references to natural and supernatural realms, the sculpture draws upon Māori cosmology and creation narratives. It also has as a personal resonance for Paterson as his Ngāti Rangithi kaumātua describe their iwi, who descend from the Te Arawa waka of the Bay of Plenty, as ‘Te Heketanga-a-rangi’, those who descend from the celestial heavens, in reference to their tūpuna, Ohomairangi.
Guide Kaiārahi was created with the support of Edmiston Trust. 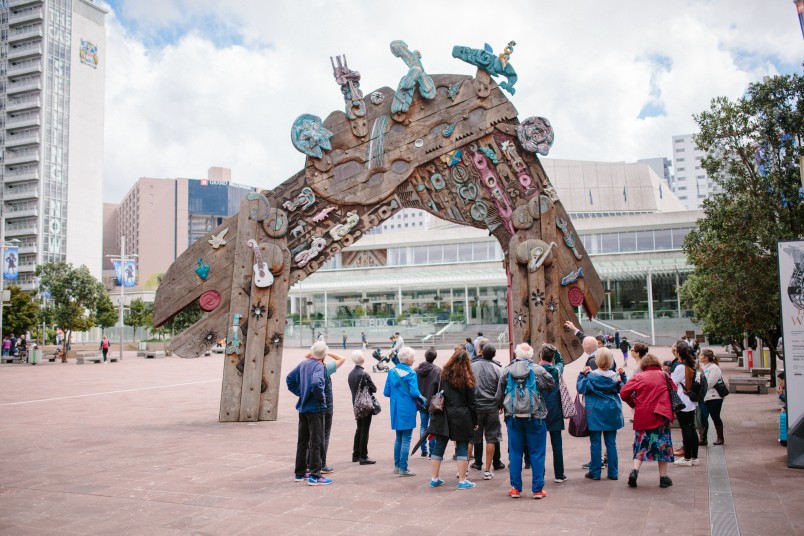 Standing tall at the entrance of Aotea Square, Waharoa is a 7-metre-high gateway transforming the square into a marae or meeting place. Waharoa was created by artist Selwyn Muru using huge pieces of macrocarpa and carved with a chainsaw and chisel.

Five main symbols can be seen at the top of the gateway – Tama nui te (God of the Sun), Tangaroa (God of the Sea), Tane Mahuta (God of the Forest), Tawhiri Matea (God of the Elements) and Whetu me te Marama (the crescent moon and stars).

As well as these symbols, shapes rooted in mythology from all over the Pacific can be seen on the sculpture along with a multitude of images including birds, fish, the nuclear disarmament symbol, a cross, and a heart and arrow. These abstract images derive from Polynesian tapa cloth and the triangular patterns from 19th century Māori art.

Selwyn Muru: "The aim of this waharoa (gateway) is to welcome and embrace manuhiri (visitors) to Aotea Square. I chose wood as a medium because it already has Mauri (life force) of its own that would exude warmth in an environment dominated by steel, glass and stone."

Top 10 city centre eateries you are missing the most