Archived: The Wake: A Poem in the Forest 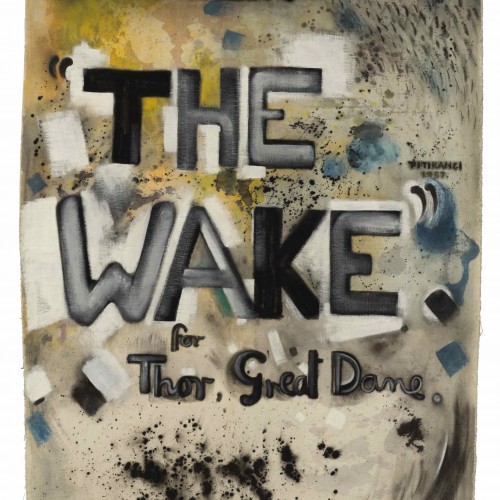 The Wake: A Poem in the Forest, ‘Te ohonga’: he ruri rō ngahere is Colin McCahon’s largest painting, comprising 16 unframed panels which together were designed to fill an entire room. McCahon’s distinctive script covers 10 of the panels, while six feature the land and kauri. McCahon painted The Wake in the attic of Auckland City Art Gallery following his return from a four-month trip to the United States of America in late 1958. After the trip, McCahon started painting at a larger scale, he began to work in series, and numerals entered his vocabulary. The paintings of 1958 also mark a shift in his attention from structure to process and gesture, and to the creation of painted environments.

McCahon explained: ‘They are an attempt to create a new environment and a quite new visual experience.’ Part of this new experience involved a fusion of the arts, with painting and poetry coexisting on the surface of the canvas. The Wake was designed as an immersive setting for visitors to experience live performance. When it was exhibited at the Gallery on Symonds Street in Auckland in 1960, John Caselberg gave readings of poetry by Thomas Hardy and Gerard Manley Hopkins.

Click here to read the poem, The Wake by John Caselberg, that McCahon transcribed onto 10 of his painted panels.